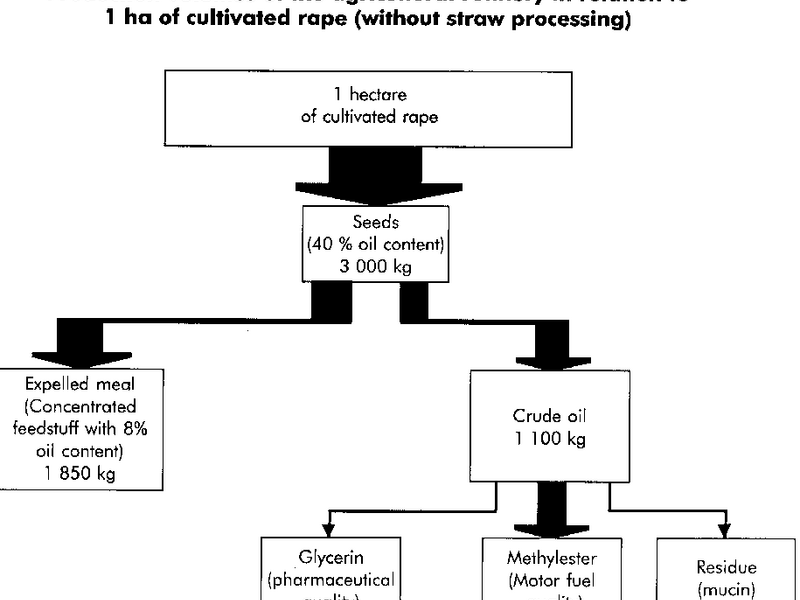 Feasibility study of following components among others:

Within the scope of a European project supported by Germany, France, Greece, Italy and Spain Dorsch has been commissioned with the preparation of a feasibility study on a pilot project for the large-scale production of biodiesel using rapeseed oil as a renewable source of energy.

Natural resources exploited from biomass can be employed in three main spheres: in fuel production, in heat and power generation and in material processing.

In this way vegetable matter constitutes a renewable source both of energy and of raw materials for industry. The general objectives of the biodiesel project are to serve the replacement of diesel fuel on a regional scale, to improve the environmental situation in urban areas in particular and to promote the long-term stabilization of farmers' revenues. At the same time it is expected to lead to the avoidance of the excess production of cereals in common market agriculture and reduce the dependency on fuel imports.

The plant itself, the first of its kind in the EC, is to process biodiesel using an input of 300 000 tons of rapeseed per year - with an average storage and marketing turnover period of only 20 days thanks to the favourable access by canal, railway and road for the direct shipment of raw materials and final products alike.

It is intended to employ the resulting rape methylester as the sole fuel supply for certain categories of motorvehicle. The effect of this biodiesel on their engines is being analyzed by TÜV Rheinland (Statutory Safety Association) under a separate contract.

Similarly, the effect of the fuel on the environment is being assessed by means of large-scale experimental tests with public transport fleets and agricultural vehicles. DORSCH CONSULT's study embraces the complete technical, environmental, economic and financial feasibility of the proposed plant.