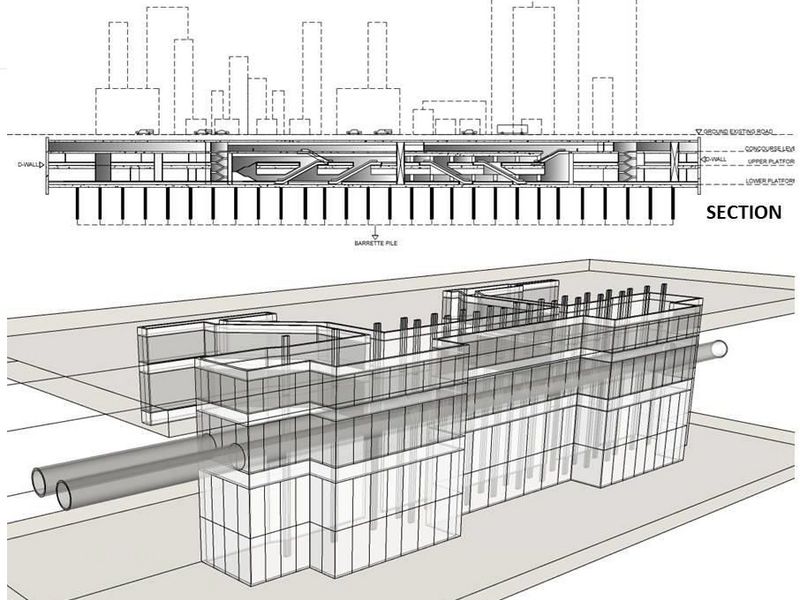 DC Asia is currently providing EPC Consultancy Service during the pre-tendering and tendering phases as follows:

Orange Line Western Section Civil Works:
Provide assistance to EPC in connection with
1) Construction Methodology including narrative files, computation data, power point doc., photo and video documents, for the work scope of civil works and trackworks;
2) Method of measurement, unit prices of the completed sub-items in accordance with the practicing Bill of Quantities;
3) Drawings and specification applied during the construction;
4) Industry information including the industry news, tender arrangement, key personnel appointment, updating the information of the vendor list in accordance with the implementation of the on-going projects;
5) Marketing information including assisting the EPC to approach and access the
subcontractors/vendors/suppliers for the quotation on the sub-work items, materials and equipment;

Drawings and Quantities
1) Review, checking and examining on the preliminary design drawings and the related Bill of Quantities (BOQ), for the integrity, soundness and accuracy of the quantities in the BOQ in accordance with the design drawings.
2) Work out the most optimized design solution in term of the convenience of the project site construction and management, in parallel with the modification on the quantities accordingly.

Vendor list and Price Inquiry
To assist EPC during the price preparation stage for the investigation on and price inquiry to the local sub-contractors and suppliers, including but not limited to organize meetings and workshop with potential vendors and subcontractors, frequent communicating, official visiting, inquiry letter and supply quantity preparation, bargaining for the most competitive supply price., etc.

Technical proposal
Draft the technical documents in accordance to work scope to be priced by the EPC, including but not limited to Mobilization and Project Implementation Schedule, RAMS, Quality Control, HSE Control, method

The Taling Chan - Min Buri MRT Orange Line is scheduled to be the main mass transit system linking the East and West Bangkok.

The MRTA Orange line will be an electrified heavy metro rail system with a maximum theoretical speed of 80 km/h. Traction power collection will be via a 750 Vdc third rail. Trains will consist of 4 cars with a total length of approximately 90m, extendible to 6 cars, and will be operated through Automatic Train Control (ATC) principles using Communication Based Train Control Technology (CBTC). As an option, the operation might be full UTO (without a driver nor a train attendant onboard)

When fully completed, the MRT Orange line will be 39.9 km long with 29 stations and 11 intervention shafts (7 stations will be elevated and 22 will be underground). Both elevated and underground sections will be using Standard Gauge tracks of 1.435 m. The Orange line depot, will be located at Huay Kwang, next to the existing Blue Line depot, making it an independent line, with its own depot, rolling stock fleet, park & ride facilities and railway control facilities.

The MRT Orange Line is divided into two sections:

The MRT Orange Line East Project will run for 22.5 km, underground (twin tunnels) for 13.77 km, and elevated for the rest from Thailand cultural centre to Suwinthawong. It will stop at 10 underground stations and 7 elevated stations, comprising 3 interchange stations. The Orange Line East Project also includes the building of a depot and of an OCC sized for those whole lines. The opening of this first section is expected in 2023.

The MRT Orange Line West Project will run underground (Twin tunnels) for 17.5 km, and will extend the east section from Thailand Cultural centre to Taling Chan. It will stop at 12 underground stations, comprising 6 interchange stations. The opening of this second section of the Orange Line is expected in 2027.

The alignment passes through high density residential and commercial areas where high growth rates have been forecasted, government offices, tourist attractions and sporting and community venues.